Congratulations Mexico, you finally have yourselves a UFC champion! And you couldn’t have asked for anyone better.

Now of course this isn’t the first time that the UFC has seen a Mexican champion. The first being former heavyweight champion Cain Velasquez. However, Velasquez was born in America. Brandon Moreno was not only born in Tijuana, Mexico, he still lives and trains there to this very day. Which is why Moreno’s moment on Saturday was so special, for a multitude of reasons. 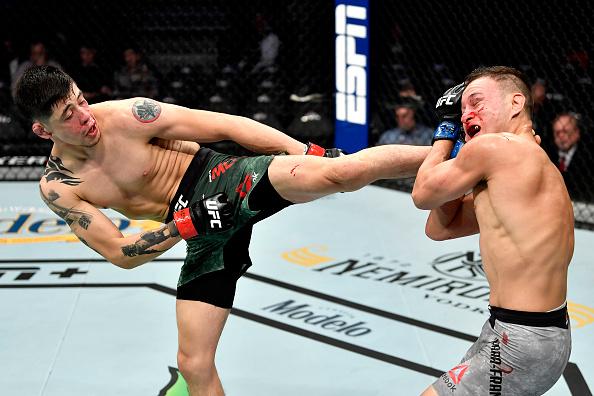 In late 2018, Brandon Moreno found himself on a two-loss skid. At 25 years of age, Moreno would later reveal that he had been cut from the UFC. The Assassin Baby would fight once for Legacy Fighting Alliance in the summer of 2019 and would win his fight in the fourth round via technical knockout. Just three months later, and Brandon Moreno would return to the octagon.

That right there should tell you just how resilient Brandon Moreno is. Not only has Moreno shown true grit throughout his fight career, but he’s also shown an innate ability to really evolve as a fighter.

It can’t be stressed enough just how quickly this sport is growing in terms of skill level. Not only has the level of competition drastically increased, but also the amount of elite competition as well. Fighters these days tend to be way more well-rounded. On the DC & Helwani Show, Daniel Cormier made a great point about how being a “specialist” in MMA may no longer be a thing, and how Brandon Moreno was an example of the future.

When discussing the bout between Belal Muhammad and Damian Maia, Cormier made note of Maia’s jiu-jitsu heavy style by saying, “You can’t fight with a singular style anymore in the UFC. I think that showed in the Adesanya fight. When he got his back taken by Vettori, a guy who has a number of submissions on his resume, Adesanya just reversed the position. It showed in Deiveson Figueiredo getting submitted by Brandon Moreno as a jiu-jitsu black belt. You can’t be singular anymore. You have to have all the skills.”

In his first attempt at claiming the 125-pound title, Moreno would not only go the full distance with the defending flyweight champion Deiveson Figueiredo, but the fight would also end in a majority draw. The fight was close, and Brandon Moreno even had Figueiredo hurt at one point.

Considering both men only had three weeks to prepare for their first bout, as opposed to six months this time around, this rematch was bound to be electric.

In the first round, Brandon Moreno came out as confident and as loose as could be. His combinations were coming together so well immediately. And in terms of the amount of difference in output between Moreno and Figueiredo, The Assassin Baby was significantly out striking the defending champion by the end of round one.

With less than a minute and half left in the first round, Moreno caught the Brazilian champ with a clean jab that would drop him. Figueiredo was able to recover quickly and survive the round. But there was certainly a clear momentum change going into the second. Brandon Moreno was much sharper and seemed to be on a different gear this time around. 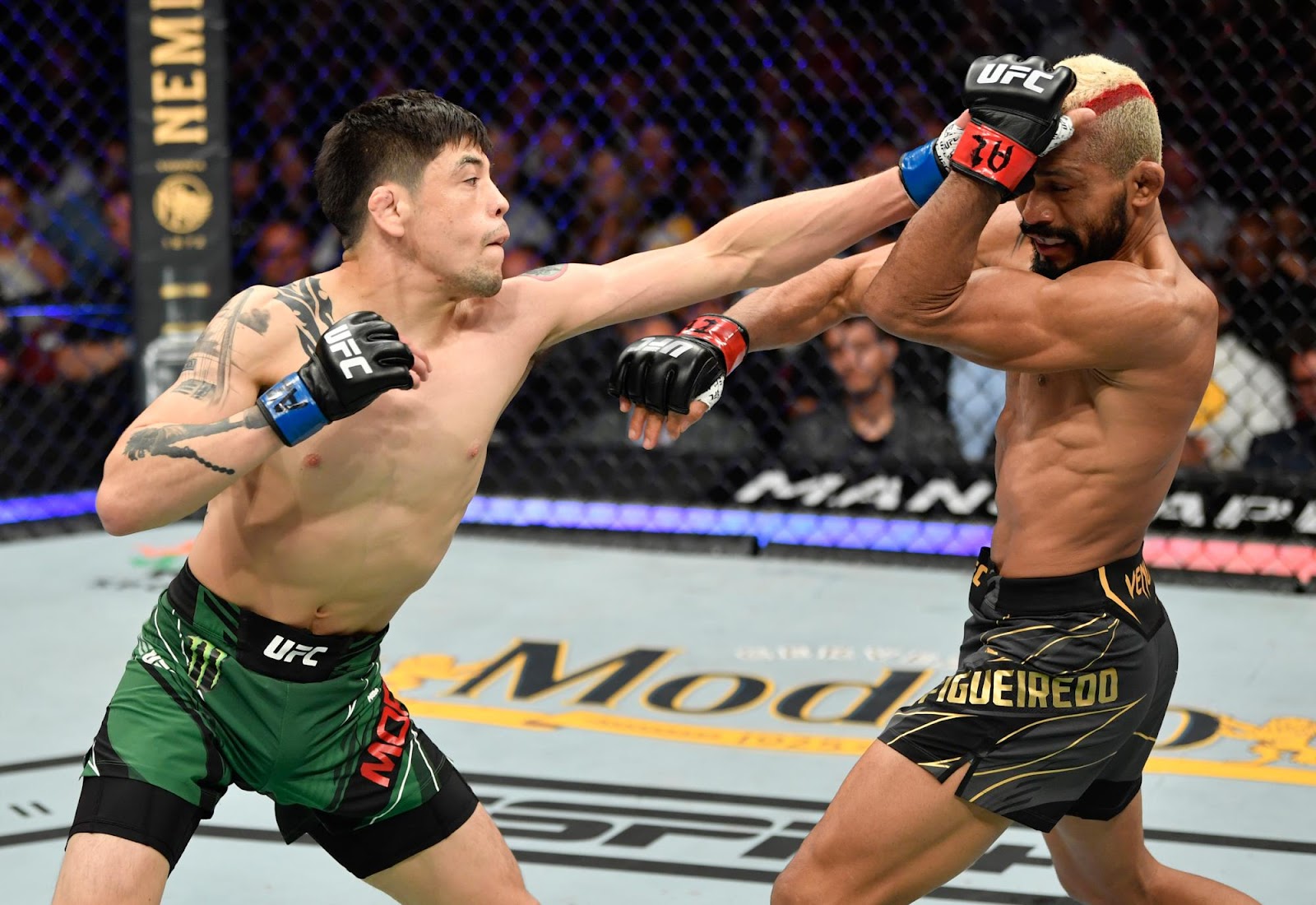 It should also be noted that the defending champion notoriously has had trouble with making 125-pounds. On Friday at the weigh-ins, Deiveson Figueiredo made weight with just 40 seconds left before the cut off. At some point, the wear and tear of bad weight cutting will catch up to your performance. It’s possible that the bad weight cut really compromised Figueiredo on Saturday night.

After getting out struck in the first round, Deiveson Figueiredo made the smart adjustment of going for a takedown. Which he was able to successfully land. However, like the defending champion, Moreno is also a black belt in Brazilian jiu-jitsu. At no point was Moreno in any danger, nor did it take much time for him to get back up either.

When Moreno was able to scramble back to his feet, he was able to hold onto Figueiredo and follow him to the cage. After throwing a few knees to the back of the champions thigh, Moreno was able to drag him down and threaten a rear-naked-choke. But the champ was able to escape the threat of the submission and would push the fight to the third round.

At no point did Moreno’s pace change. He immediately went back to work in the third round with that lead jab that dropped the champ earlier in the fight. Once Moreno found his range, he threw an overhand right that wouldn’t land, but would allow him to get close enough to Figueiredo for a takedown. Immediately upon tripping the champ, Moreno was able to quickly take Figueiredo’s back and secure both leg hooks. Moreno once again went for the rear-naked-choke, but this time he was able to secure it and make the champion tap out. 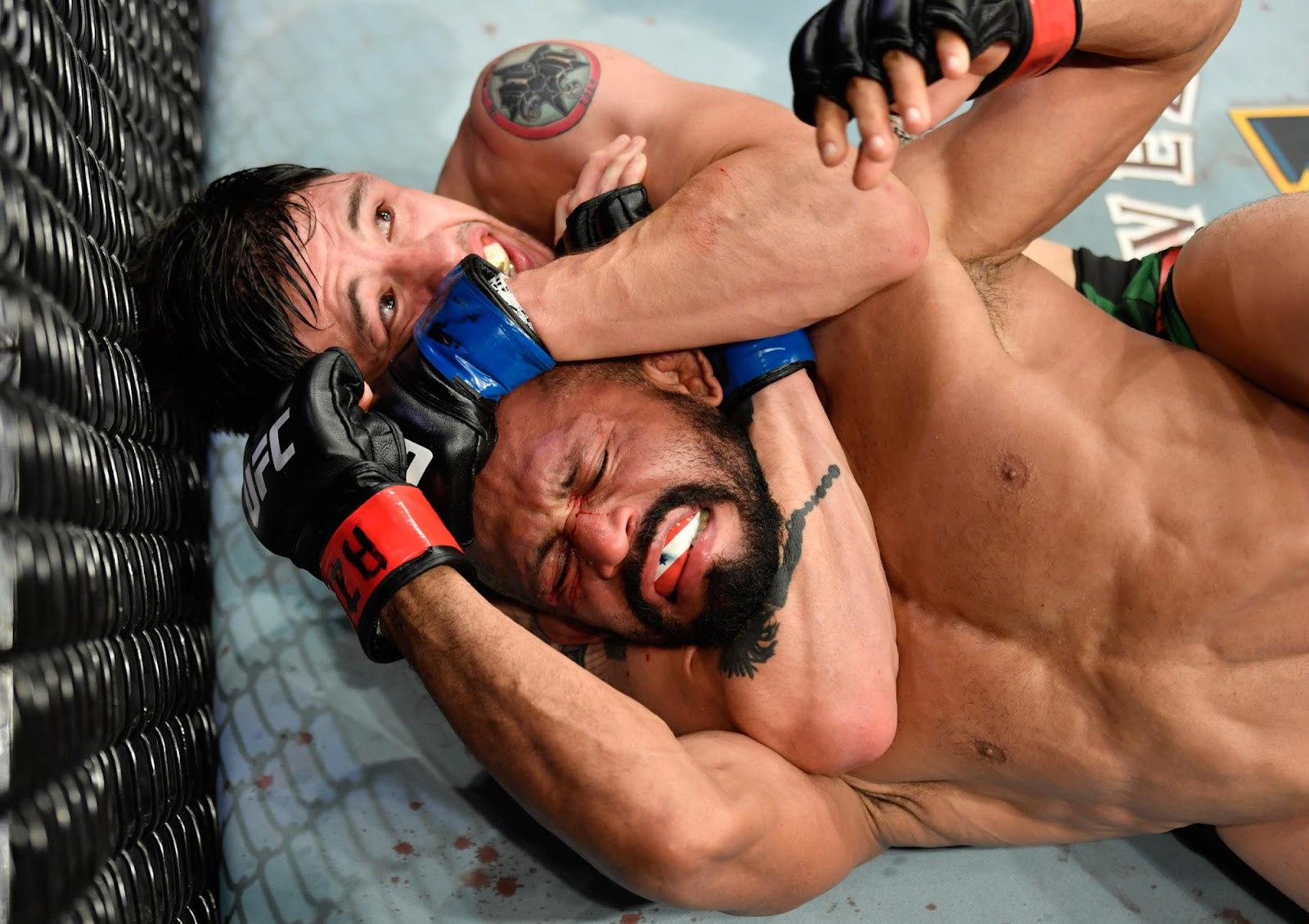 After the fight was stopped, Moreno stood up and calmly walked around the Octagon as he gazed at the crowd going wild. While he may have been two and half hours away from his hometown of Tijuana, it felt like it may as well have been in Mexico with how loud the crowd was. You really could see the reality of everything sinking in with each second on the face of Moreno.

Those are the moments that really make this sport special. It’s always a beautiful scene when there is a crowning of a new champion, but Brandon Moreno’s moment and journey felt so unique. Moreno always believed in himself.

In his post-fight interview after defeating Dustin Ortiz in 2017, Moreno told former commentator Brian Stann, “Maybe not today, maybe not tomorrow and maybe not the next month, [but] only one thing this is true: I will be champion one day. I promise. I promise.” 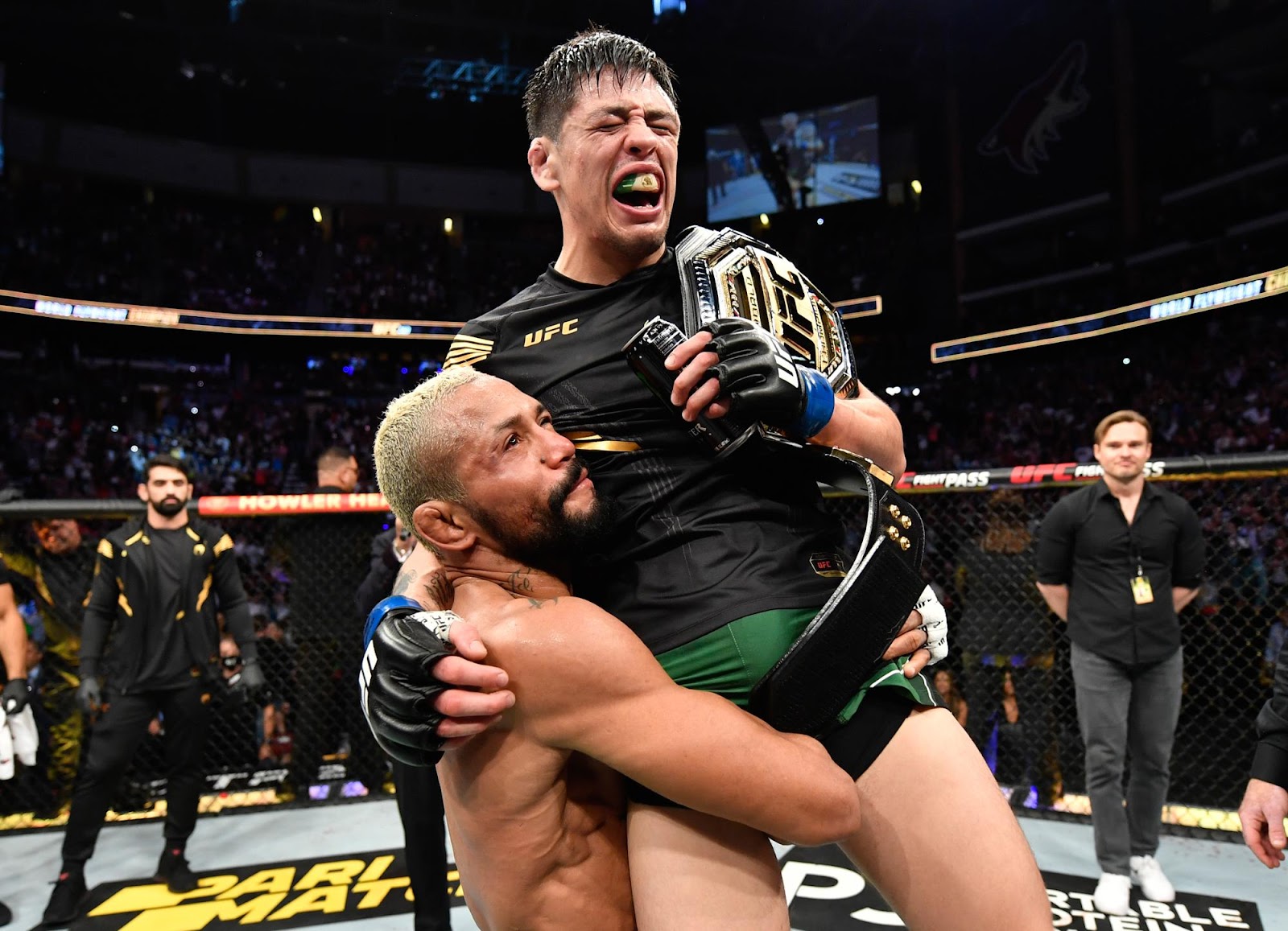