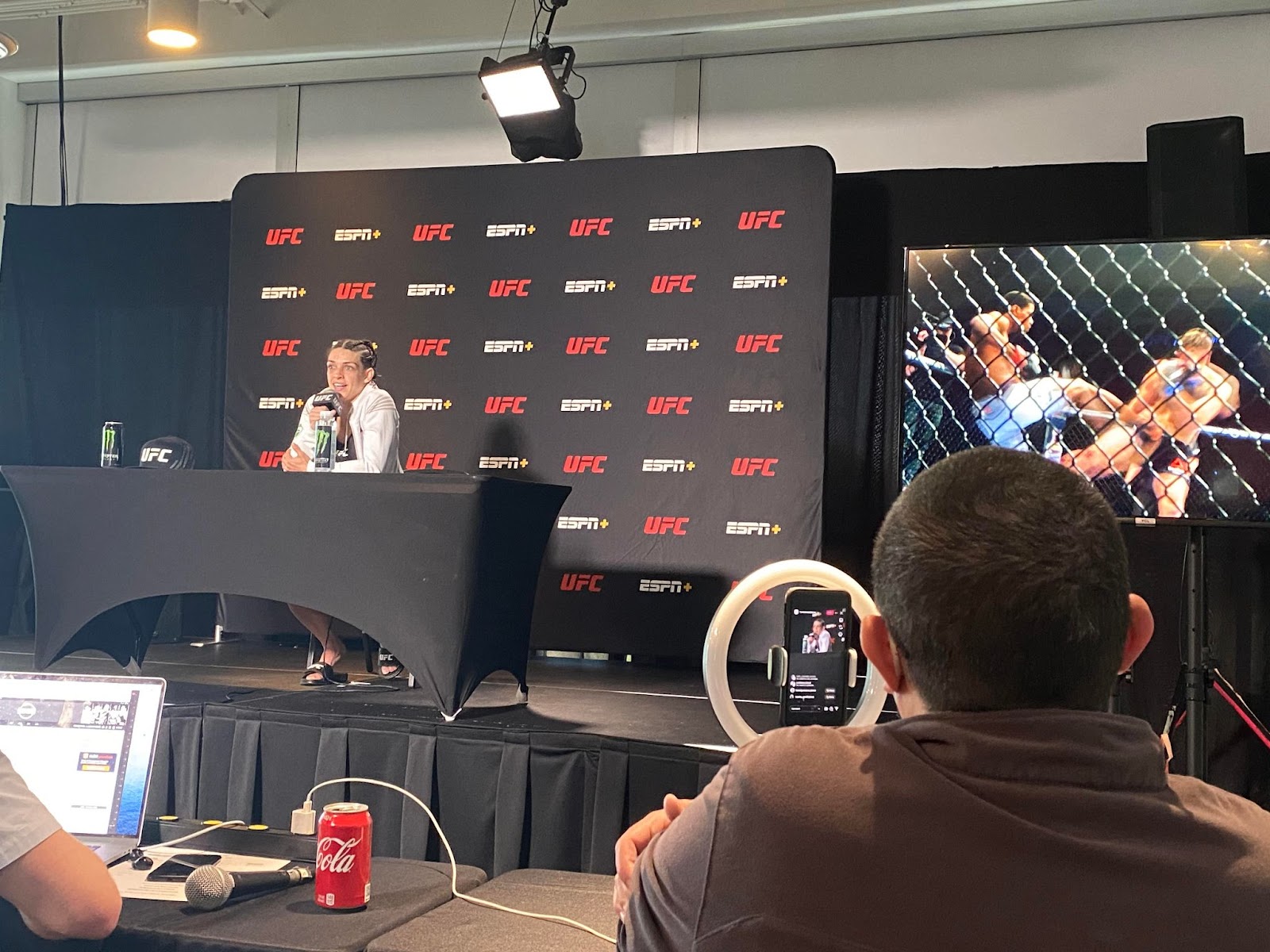 As the evening sun barely started to peak over Las Vegas, the UFC closed the books on their 23rd event at the Apex Center

The morning bouts took no time setting the pace, as Impa Kasanganay was able to secure a second-round submission over Sasha Palatnikov in the early prelims. Even if you’re the most casual MMA fan, chances are you’ve seen and heard of Impa Kasanganay before, as he was on the receiving end of Joaquin Buckley’s notorious spinning back kick knockout.

But with a move down to the 170-pound-division and a relocation to Sanford MMA, Kasanganay quickly silenced all doubters that wrote him off. While anyone else would let that number of eyes and amount of attention for the wrong reasons overwhelm them, Kasanganay seemed unshaken. His calm demeanor throughout the fight week proved to pay dividends to his confidence in getting the job done and securing a finish in the second round.

There were plenty of other impressive performances on Saturday’s prelims as well. Notable performances from the likes of Jarjis Danho, who put Yorgan De Castro to sleep in the first round! After a five-year layoff, Danho couldn’t have asked for a better comeback.

Despite losing his UFC debut, Mateusz Gamrot was able to bounce back into the win column, as he was able to deliver a second-round knockout over lightweight Scott Holtzman. During the post-fight media conference, Gamrot wasn’t shy in expressing interest in getting back inside the octagon as soon as possible, he even had a name in mind.

And to kick off the main card, welterweight fighter Daniel Rodriguez, was able to successfully nullify Mike Perry’s offense and power, earning his 14th victory in the sport. During his post-fight interview, “D-Rod” was more than humble in victory. Rodriguez briefly explained to the media a past life of struggles, and how not only has mixed-martial-arts made him a better man, but if he can do it, then so can anyone else.

Jiu-Jitsu and grappling were on full display tonight. Brazilian jiu-jitsu black belt, Mackenzie Dern, submitted Nina Nunes in the first round via armbar. Dern’s conditioning and physical shape seemed at an all-time high going into the bout, and it was truly backed by a dominant performance.

Considering Nunes was ranked fifth in the women’s strawweight division, and Dern ranked eleventh, it’ll be interesting to see where exactly Dern will be placed. Especially considering that the champion of the women’s strawweight division, Weili Zhang, will be defending her belt against number one ranked contender, Rose Namajunas, at the end of April.

But as of now, it seems like Dern will just sit back and watch the division play out.

“I just want to see who wins with Rose, Zhang, Carla and Yan. I know Joanna doesn’t have a fight, but everything depends on where I go in the rankings. I’ll just see what happens, but I definitely want someone ahead of me. I’m prepared for everyone.”

Shortly after Dern’s first-round submission victory, “The Cuban Missile Crisis” Julian Marquez had an impressive submission win of his own. Having fought and won less than three months ago, Marquez had a quick return as took on fellow middleweight, Sam Avley. Ironically, the two are known for their bright and fun personalities, but when the octagon is locked, it’s purely business.

Marquez and Alvey wasted no time in throwing heavy shots early into the fight. “Smilin” Sam Alvey was fighting off of a 4-fight losing streak, with his last fight ending in a draw. He knew his back was against the wall, and he wasn’t about to rollover for Marquez. But early on in the second round, Marquez had Alvey wobbled. "The Cuban Missile Crisis" was able to land a heavy hard left hook that dropped Alvey.

Alvey, immediately grabbed for the legs of Marquez, doing his best to avoid damage. But he was met by a flurry of hammer fist from Marquez, who was looking to end it then and there. Marquez was then able to sink in a rear-naked choke that put Alvey to sleep.

Despite the change in training camps, and with now two back-to-back finishes, this victory surely reaffirmed Marquez’s recent career decisions.

“It was super amazing for me, my career, and confidence. Understanding that I made the right decision to go to Glory MMA & Fitness, I’m trusting the process and my coaches. It’s a huge leap for me.”

And in our co-main event, featherweights Arnold Allen and Sodiq Yusuff went for all three rounds. Allen was able to get the nod and win by unanimous decision. But despite advancing his winning streak to 11, Allen is looking to get more finishes and prove that he has power.

“I haven’t had a knockout finish in a while. I know how hard I hit, but I haven’t proven it to the world yet. I need to prove it. There was a lot of pressure on myself to get that finish. When I fight people, I don’t think they give me a lot of respect. Do I get the respect off this fight? I don’t know, maybe. Whatever’s next.”

Originally, our scheduled main event saw sixth-ranked middleweight, Marvin Vettori, take on fifth-ranked contender, Darren Till. However, a collarbone injury forced Till to withdraw from the fight, allowing “Trailblazer” Kevin Holland to step in on a week’s notice. Considering how Holland’s last bout with Derek Brunson wasn’t the most well-received, you could just tell thatHolland was eager to get back in there and leave that last performance in the past.

But despite Holland’s noble and risky move of accepting the last-minute fight, Martin Vettori was able to secure a dominant decision through grappling. Holland was able to find some success whenever the two were standing and exchanging, but ultimately, Holland ran into the same issue he faced against Brunson.

Kevin Holland quickly became a hot name in the UFC because of his activity. Having fought and won five times in 2020 (four of which were finishes) and now after fighting for the second time in 2021 (with just three weeks off) it looks like that schedule has caught up to Holland.

As said by the commentary team during the fight, it’s not like Holland isn’t a talented or capable fighter who can make adjustments. He just needs more time to add more weapons and to evolve certain aspects in his game. 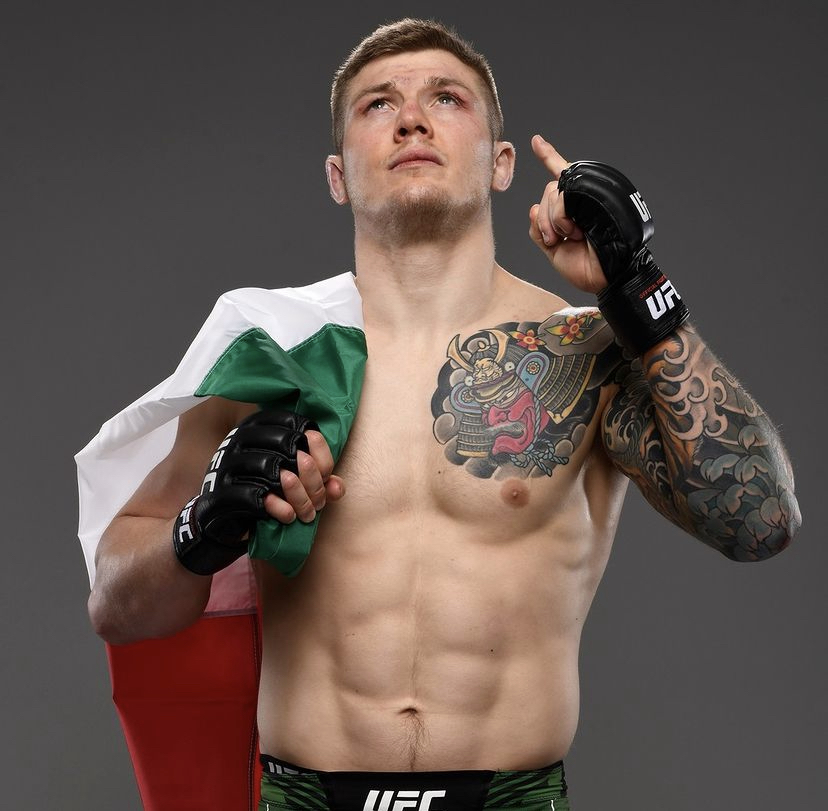 Luckily, we won’t have to wait long to see how this middleweight division plays out. On April 17th , we’ll see number one middleweight contender and former champion, Robert Whittaker, take on eighth-ranked middleweight, Kelvin Gastelum. Martin Vettori told media that he hopes he can sit next to UFC President Dana White during next week’s main event, because the result of that main event will more than likely show who may be next for middleweight champion Israel Adesanya.

Vettori getting the winner of Whittaker and Gastelum doesn’t seem that far-fetched. But I think that if Whitaker (specifically) makes a statement on 17th, I believe he’ll be the one to challenge the middleweight champion, Israel Adesanya, next.