Cory Sandhagen is officially undeniable. Last Saturday on February 6th, second-ranked bantamweight, Cory Sandhagen, put UFC legend Frankie Edgar to sleep in just under 30 seconds. In a week of sports where we had the old guard going against the new guard, The Sandman proved very quickly that he is the future of the 135-pound-division.

Seventh-ranked bantamweight, Frankie Edgar, has been a living legend of the sport for quite some time. In 2010, Edgard defeated B.J. Penn in a grueling fight to become the Lightweight Champion. Edgar has always been a crowd favorite and is truly a pioneer of the sport. His heart and toughness have always been so easy to get behind.

For the past decade, Edgar was keeping his name in the mix of whatever division he was in. Whether that be his time spent in the lightweight, bantamweight, or featherweight division. The matchup between Sandhagen and Edgar had the hardcore fans buzzing in the lead up to the fight. In just his eighth UFC appearance, Cory Sandhagen quickly rose through the 135- pound rankings. Sandhagen has only seen two decision victories in his three years with the UFC. He has` clearly shown that his standup game was where it needed to be, and he also had the ability to finish the fight on the ground if need be.

Edgar has always been known for his footwork, boxing, and elite wrestling. Rarely will you find the New Jersey native being idle as he’s always bouncing from side to side looking for his opening. The challenge of Edgar’s elite wrestling, boxing, and veteran IQ could’ve given Sandhagen real problems. But even with Edgar’s veteran experience, the Colorado native proved to just be too quick in the end.

As soon as the fight started Edgar was pushing the pace. He was in the face of Sandhagen for the first 20 seconds of the fight and continued to push him back towards the cage. However, Sandhagen’s defense and footwork nullified Edgar’s offense as he continued to circle around the wrestler's left hand. 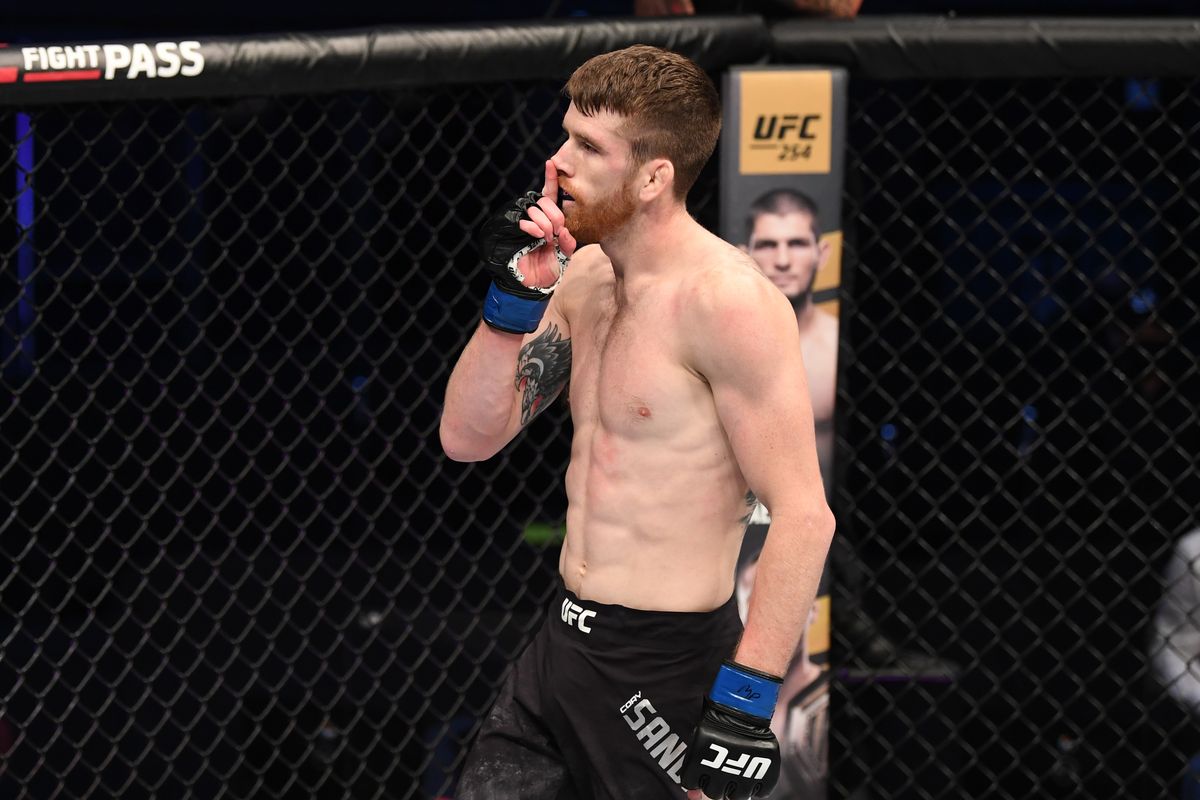 Sandhagen did a perfect job of staying out of Edgar's reach. As the two bantamweights stood in the center of the octagon, Sandhagen threw a low leg kick that Edgar was able to successfully avoid. As Sandhagen was starting to reset, he took a few steps back towards the cage, drawing Edgar in. As Edgar started to advance forward, Sandhagen perfectly aligned himself for a flying knee that would land flush on the chin of the former lightweight champion. Edgar’s body immediately stiffened as he was out cold.

Immediately, the knockout set the fighting world on fire. Fighters were tweeting adulations towards Sandhagen for his potential knockout of the year highlight. But despite his amazing performance that could have potentially earned him a title shot, Sandhagen showed empathy and a bit of remorse towards his opponent during his post-fight interview with Daniel Cormier. “It feels good man, but that’s Frankie Edgar you know. I don’t want to watch that happen to him, but better him than me. That’s the game we’re in.”

Despite feeling remorse, Sandhagen knows what this win does for him. It leaves him with no doubt that he is undeniable for a title shot.

Reflecting on his loss in June 2020 to Aljamain Sterling, the next man to challenge Bantamweight Champion Petr Yan on March 6th, Sandhagen feels that he’s done more than enough to show that he is a different man and fighter compared to when the two first met last June.

“I’m a different monster than I was before I fought Aljamain Sterling. He taught me some lessons. I know (Petr) Yan has been talking about fighting TJ (Dillashaw) after that fight, that’s even if he wins that fight, that’s garbage to me. Fight me, I’m the toughest guy next to Aljamain Sterling. And if Aljamain wins, I owe him a nap. And he’s going to get that nap. The winner of those two gets knocked out by me in July.” Petr Yan and Aljamain Sterling will meet in the octagon to determine the future of the bantamweight division on March 6th at UFC 259. Best believe that The Sandman will be watching the championship fight closely come March.