UFC 257 is officially in the books and man what a night it was! Dustin “The Diamond” Poirier handed UFC megastar, Conor McGregor, his first knockout loss. And in the co-main event, Michael Chandler delivered the best debut possible with a big knockout over sixth-ranked lightweight, Dan Hooker.

In September 2014, a 26-year-old Conor McGregor squared off against a 25-year-old Dustin Poirier. McGregor was six years into his professional mixed-martial-arts career, Poirier just five years in. McGregor went onto finish Poirier in just under two minutes in the first round. Six years later, and Dustin Poirier is finally a redeemed man.

When the rematch was first announced between the fighters, it couldn’t have been stressed enough just how much of a different fighter Dustin Poirier had become since 2014. Likewise, for McGregor, both fighters are leagues above their skill level from when they first met.

After his loss to McGregor in 2014, Dustin Poirier went on a four-fight win streak. The Louisiana native continued his hot streak from 2017 to 2019, with wins over Anthony Pettis, Justin Gaethje, Eddie Alvarez, and Max Holloway. The evolution and growth of Dustin Poirier’s boxing and confidence was becoming more and more evident every time he would step in the octagon.

Just because Poirier lost to McGregor in 2014, it felt like a lot of media wasn’t giving Poirier the true respect his stand-up game deserved. The only other man Poirier had lost to since 2016, was the current lightweight champion, Khabib Nurmagomedov.

From the very beginning of the fight, Poirier perfectly laid the traps he would need in order to win. Within the first 20-seconds of round one, Poirier delivered the first of many low calf kicks to McGregor’s lead leg. The lower calf kicks were pivotal to Poirier’s victory as it almost immediately started to take a toll on McGregor’s movement.

However, it’s not like McGregor didn’t have any success in the fight. McGregor was landing very good shots, and his clinch work against the cage looked great.

Poirier was consistent with the low calf kicks, and it became very apparent that they were starting to take a toll on McGregor during the second round. For the majority of the fight, McGregor was the main aggressor. But as McGregor became more and more immobile, Poirier’s boxing began to flow as he was starting to find his boxing range.

Poirier would deliver one final hit to McGregor’s lower calf kick that would leave the Irishman dead in the water. “The Diamond” circled around McGregor and unleashed a barrage of strikes.

The strikes were too overwhelming, and Irishman would go crashing down, forcing referee Herb Dean to stop the fight. 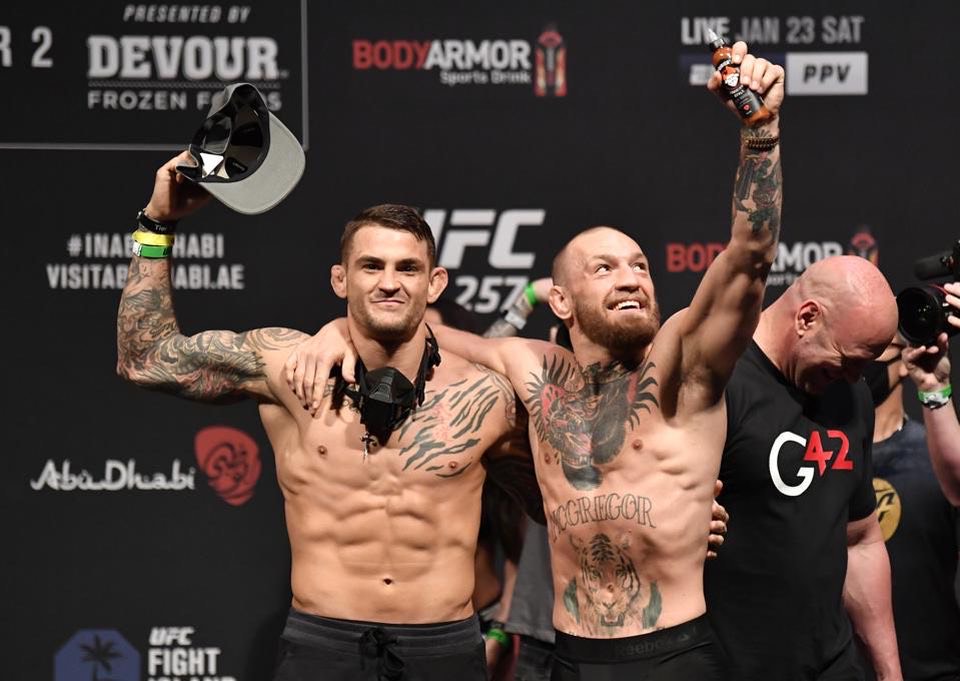 In the co-main event of Saturday night, the world was finally introduced to Michael Chandler. Michael Chandler is a highly decorated fighter who captured the Bellator Lightweight Championship three times and is an elite division-one wrestler from the University of Missouri.

Chandler took on sixth-ranked lightweight Dan “The Hangman” Hooker in his UFC debut. The clash of styles between Hooker’s striking and long reach, against Chandler’s pressure and skill made for an intriguing matchup. Luckily, Chandler didn’t seem to let the moment get the best of him, as he had been telling media all week that he had felt like he was home. 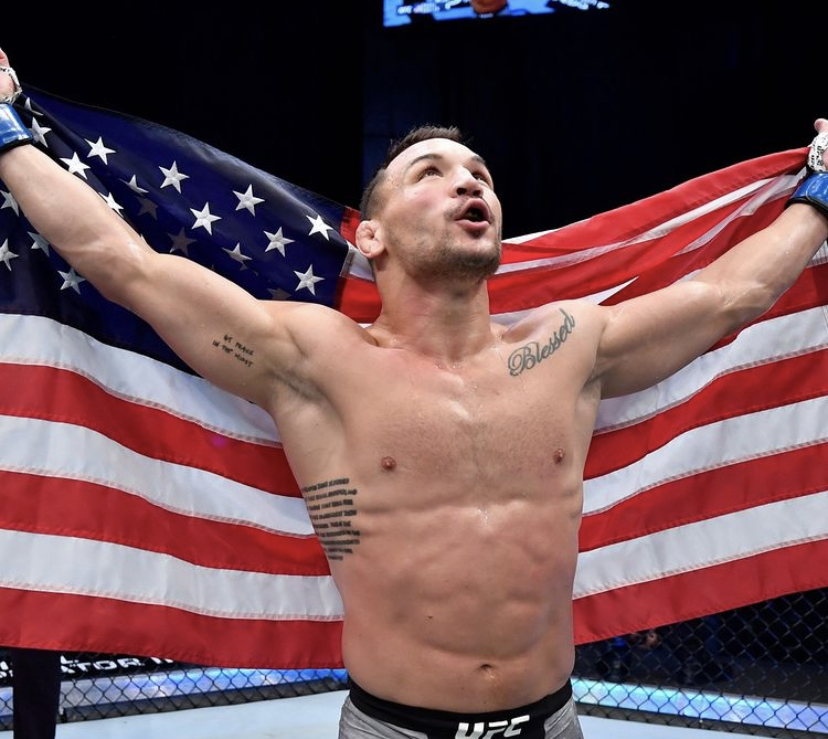 Fans also shouldn’t forget that Chandler actually already went through a full camp, and even traveled to fight island, as a backup for the Nurmagomedov and Gaethje fight in October. This is a man hungry to fight and clawing at the opportunity to make a statement.

Immediately Chandler was forcing the pressure on Dan Hooker. Hooker was staying on the outside, circling around the wrestler, peppering Chandler with leg kicks as he stood outside of his range.

Chandler was still able to find his range with a nice jab, and straight punch to the body of Hooker. When Chandler backed Hooker into the corner, he would throw the same one-two combination to the body, but this time, he followed it up with a beautifully placed left hook that Hooker was not expecting.

Hooker was immediately dropped by the left hand. As he tried to shoot for the legs of Chandler to avoid further damage, Chandler unleashed a barrage of strikes on “The Hangman” until referee Marc Goddard called a stop to the fight. 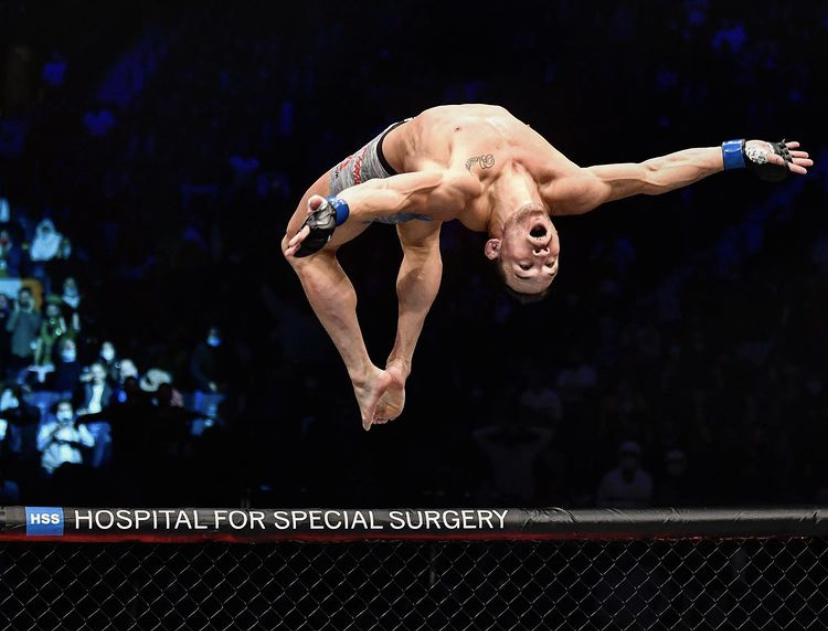 With one hell of a promo and call back to Ric Flair’s famous “tear in my eye” speech after winning the 92’ Royal Rumble, Michael Chandler put the 155-pound division on notice, calling out Nurmagomedov, Poirier, and McGregor.

The future of the lightweight division title is still up in the air as we don’t know whether or not Khabib Nurmagomedov will defend his title once more or stay retired. UFC President Dana White told the public that in his meeting with Nurmagomedov earlier that week, that the champ was waiting to see what would happen between the four men in the co-main and main event.

In the post-fight press conference of UFC 257, Dana White told the media that he had actually spoken to Nurmagomedov after the fights concluded. Essentially, “The Eagle” didn’t seem to be all impressed with the performances he saw Saturday night. Since it remains unknown whether or not we’ll be seeing Nurmagomedov back in the octagon, for right now, I think it’s safe to call Dustin Poirier the uncrowned king of the lightweights.