Arrowhead Stadium has been a house of horrors for Derek Carr in his seven year career under center for the silver and black. Coming off of back to back losses, Carr and the Raiders expressed frustration all week through the media, leaving Kansas City with a win was already a tough challenge despite all the history of Carr’s struggles against the Chiefs. But, it has been on the objective list of head coach Jon Gruden’s desk since 2018 and for the first time in Derek Carr’s career and the first time in Gruden’s second ture with the Raiders, they were able to board their flight back to Las Vegas victorious.

No secret around the NFL and especially in the AFC West, to beat the defending champions the offense is going to have to score points consistently. In the first half of this game, Raiders rookie Henry Ruggs made his presence felt returning from injury hauling a spectacular catch in double coverage for a 46-yard gain. Being held to three points, the Raiders defense was gashed multiple times by the arm of Patrick Mahomes as he would then find his tight end Travis Kelce for a short touchdown to give Kansas City a 7-3 lead.

The next ensuing drive for the Raiders, Derek Carr had tossed his first interception of the 2020 season, overthrowing tight end Darren Waller. Mahomes, would make the Las Vegas defense look out of sorts finding Tyrek Hill for a touchdown pushing the lead to 14-3.

And, for just a minute it had felt Derek Carr’s nightmare in Kansas City would continue. But, on the contrary did he prove his doubters wrong on this day. Carr responded to each Mahomes score with one of his own, connecting deep to Nelson Agholor for a 59-yard touchdown. Then followed a Mahomes touchdown pass to Sammy Watkins, with a bullet to Darren Waller. The first half of this game was an absolute shootout, with the biggest shot being a 72-yard Henry Ruggs touchdown, his first of his NFL career. The first half closed out with a Harrison Butker field goal to knot the game uo at 24. 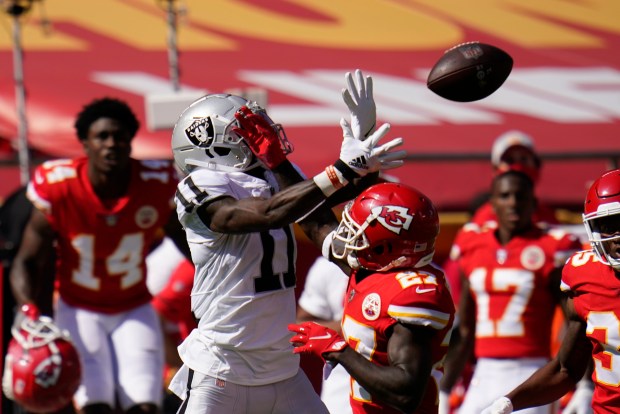 Heading to the second half, this game had taken a complete shift. A Raiders defense that had been very underwhelming all year long stepped up large, three of the five final Chiefs drives ended in punts, one ended in an interception and the last was a late touchdown in hopes of a comeback.

Finally, the Raiders had gotten some consistent pressure on Patrick Mahomes, Clelin Ferrel and Maxx Crosby were able to sack the super bowl champion back to back times. Along with the coverage of the Raiders staying sticky, the defense was able to hand Derek Carr the football and let him go to work.

Carr, in the second half continued to pick apart a Kansas City defense that was ranked second against the pass. One of the biggest passes in the game for Carr came to a wide open Hunter Renfrow for a 42-yard catch on a crucial 3rd down and 18. Carr moved the ball well setting up Josh Jacobs in the red zone, pounding his way to a two touchdown performance.

The run game is a key aspect to the Raider offense, facing a 28th ranked run stop in Kansas City, Las Vegas used more than just Josh Jacobs. Devantae Booker, ran his way to a 62 yard performance averaging 8.2 yards a carry. With the defense playing their best half of the entire season so far, the Raiders proved they can be a very dangerous team.

Las Vegas will enjoy the bye week with a 3-2 record. They will be back in the spotlight on primetime, when Tom Brady and the Tampa Bay Buccaneers come into Allegiant on Sunday night football in week seven.