Shipping Out Of Boston; Raiders Face Reality Check In New England In 36-20 loss. The Las Vegas Raiders have now dropped to a record of  2-1 after a week three loss to the New England Patriots on Sunday by the score of 36-20. After an impressive Monday night win over the New Orleans Saints, Las Vegas made the cross country trip to battle a very bitter Cam Newton lead Patriots team after being snubbed at the goal line on a potential game winning play last Sunday night in Seattle. While New England took home a 16 point victory, this game was close at one point, in fact New England only led by three at the half. Nevertheless, a few vital plays had aided the Patriots to victory and had presented themselves as the key component to defeating the Raiders in this game.

In the first quarter of this ball game, both teams were struggling to get the offenses rolling, in fact this young Raiders defense may have looked its best it had all year in the first quarter. Maxx Crosby was able to sack Cam Newton, Clelin Ferrell and Maurice Hurst were in the back field often and safety Jonathan Abrams intercepted Newton for his first career interception. Second year cornerback Trayvon Mullen looked great as well in the first quarter having three pass break ups. Where the Raiders had gotten after Cam Newton and forced a turnover, the Patriots were able to do the same and prevent any real threat. Raiders running back Josh Jacobs, was stripped inside the New England twenty yard line. Now, interesting enough, Jacobs actually recovered his own fumble. But, apparently, the Raiders are not allowed to recover fumbles in Foxborough.

A sluggish first quarter brought us to the second frame where the game had started to break its shell. New England had found a ton of life through the rushing game on Sunday, starting with undrafted rookie JJ Taylor, the stretch run schemes had beat the Raiders all day long and behind the door that Taylor had opened. Veterans Rex Burkhead and Sony Michel began to follow suit and gash the Raiders multiple times. Countless missed tackles from the Raiders secondary all throughout this game, these whiffed tackles had really begun in the second quarter and had led to the first of three Rex Burkhead touchdowns. Right before the half trailing 13-3, was easily the best Raiders drive of the day. Derek Carr connected with Hunter Renfrow to the Patriots one-yard line, to be followed by Carr’s passing touchdown to tight end Foster Moreau.

Going into the second half only down three the Raiders were starting to show some of that offensive efficiency. Being held in the red zone after a 34 yard strike to rookie Bryan Edwards that had ultimately brought him out of the game due to a bothered ankle, Jon Gruden elected to send kicker Daniel Carlson out for a 41 yard field goal to tie the game up. Carlson missed the kick wide left and this is where things started to fall apart for the Raiders.

After a week where the Patriots only had 42 total rushing yards, New England carved up the Raiders defense for a team total of 250 rushing yards. An offense under Bill Belicheck is always going to come with a masterful game plan, where this game was not his most masterful piece of play calling. The repeated screens and stretch runs continuously beat the Raiders defense like a drum for the three quarters after a sluggish first. Sony Michel had two 48-yard rushes and a 117 yard performance.  Can not forget about Cam Newton’s rushing ability either, as he had an escapability scramble to prolong a time consuming fourth quarter drive that led to more Patriot points. Rex Burkhead capped off that drive and finished a career high three touchdown day, one receiving, two rushing for a total of 98-yards. 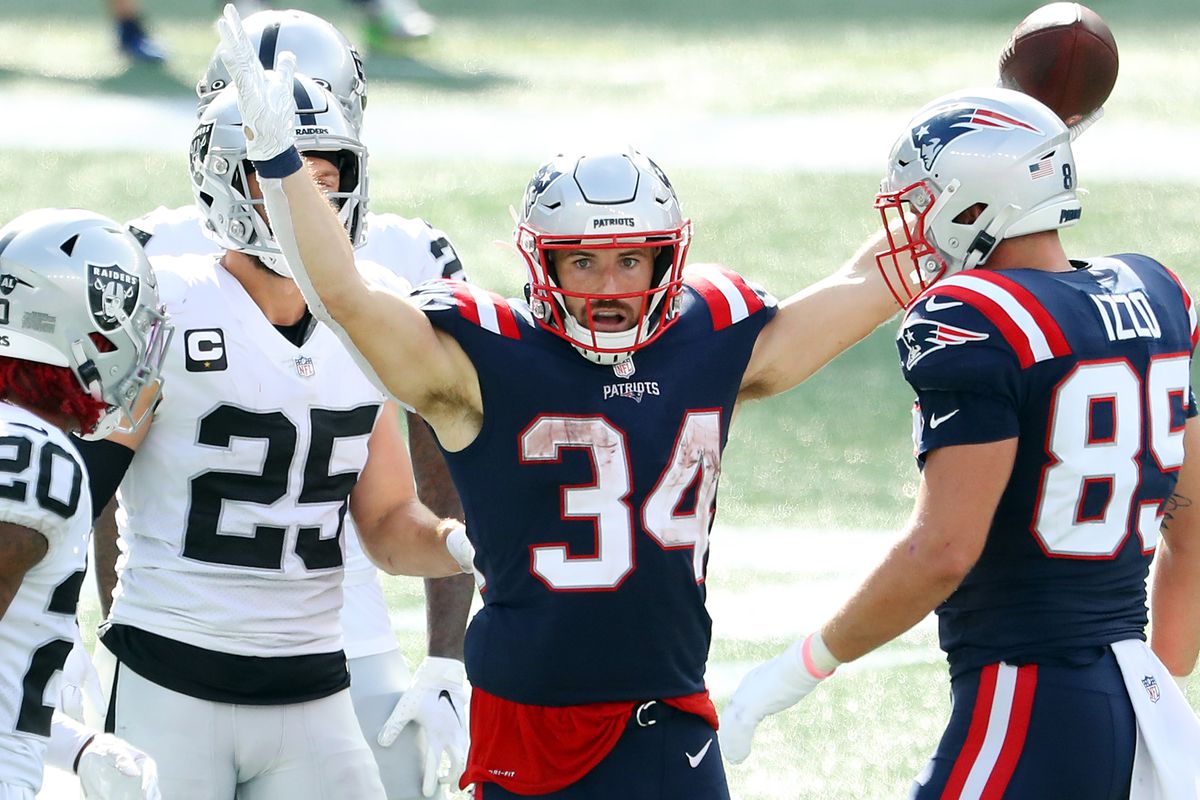 On the second to last Raider drive, all that was left was faith. The Patriots kicker, Dan Bailey missed the point after the Burkhead touchdown. Giving the Raiders some will to fight, unfortunately the ensuing drive had to start at their own 5  yard line and Carr was sacked and fumble into the end zone, his second fumble of the day and this one extended the New England lead.

At least the last time the Vegas offense saw the field, they came down to score a touchdown on a 13 yard catch and run from Carr to Hunter Renfrow.

The Raiders received a huge reality check this week. The first half shows signs of where they can improve but as for the second half, they can not allow triple digits amounts of yardage on the ground against anyone. It hurts even more so knowing that Josh Jacobs was held to 71-yards and no touchdowns, if Vegas can not establish the run or let alone stop anyone else's. It will be a long, long season.

At 2-1, the Raiders are dealing with an injury bug, in preparation for week four the Raiders will need to rest and recover. Make the adjustments offensively and defensively, to get prepared for the 3-0 Buffalo Bills at home next Sunday.