The Golden Knights extend their streak to 7 games, with tonights win over Edmonton, 3-0.

The Vegas Golden Knights are currently the hottest team in hockey, and have taken down some of the leagues best.

The Golden Knights seem to be unbeatable at home over the last two weeks, winning all six of their home games. This time around, the Edmonton Oilers were in town, as the Knights ride the streak. Fleury was phenomenal, twenty-nine saves for number twenty-nine, and most importantly, a shutout. The first period seemed to be all Edmonton, the Knights seemed flustered over the speed of the Oilers. While the Golden Knights seemed to be playing defense all period, Max Pacioretty scores a beautiful wrist-shot over the shoulder of Koskinen. Nick Cousins made his debut tonight, and what a debut it was. Whenever a player steps onto the ice in a Golden Knights jersey for the very first time, they seem to step it up a notch. Nick Cousins gave us nothing less than what we wanted. Scoring a power-play goal in the third period, to put the Knights up 2-0. 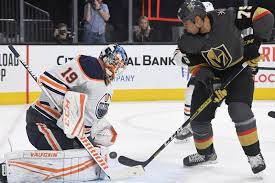 Connor Mcdavid had plenty of chances, but struggled to find the back of the net. Connor had the puck come off the crossbar, and had a puck stopped on the goal-line by Fleury. The Golden Knights did really well to stop the fast-paced game of the Oilers, and played phenomenal defense to kill the penalties.

The Golden Knights face the Buffalo Sabres on Friday, February 28th at 7:00 PM. Shipping Out Of Boston; Raiders Face Reality Check In New England In 36-20 loss.

The Los Angeles Lakers make quick work of the Denver Nuggets, 4-1, as they move on to the NBA Finals

All Adesanya At UFC 253; Retains Middleweight Strap In Second Round TKO Over Paulo Costa.