The Golden Knights put an end to the 11-Game win streak of the Tampa Bay Lightning. A storm is in Vegas, and the Golden Knights found a way to take it down.

The Golden Knights take down the Lightning, 5-3, as they are now tied with the Boston Bruins for the highest streak in hockey. Alec Martinez was the name being talked about all around the city, and he had a great debut. While the Golden Knights were trailing, 1-0, Alec Martinez scores his second goal of the season, while it gave the fans and players, a huge burst of energy. Reaves and Pacioretty score 2 goals in less than a minute to start off the third period. The Fortress was on fire, the crowd was engaged through all 60 minutes of the game. Kucherov and the Lightning, struggled to get going, as the Golden Knights did not let them get too comfortable on the ice. Tomas Nosek was struck in the face, and rushed down the tunnel, as Coach Deboer had no updates on the injury. 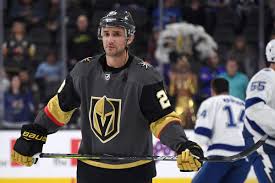 Fleury discussed post-game if they had any communication troubles during the game, considering that Alec Martinez was added on defense. Fleury expressed that it was "Not Bad", which is what most of us were expecting. While he will get some grief from the guys about his goal celebration, Alec Martinez seems to fit right in. Alec expressed that "this is a fun group to play with" and that is exactly the response everyone was looking for.

The Golden Knights take on the Florida Panthers on Saturday at 7:00 PM.