The World Series Goes to Washington! The Nationals fought harder than ever. The Nationals come from the Wildcard and Bring the Title to Washington.

“This is a team of broken fingers and broken noses”, to quote Tom Verducci. There is only one word that perfectly describes this Nationals team, and that word is “Battle”. Battle when you are knocked down, battle whenever you are given the chance. This is what the Nationals live by, and we all see it right before our very eyes. The Wildcard game did nothing, but prove that. Down to their last 4 outs, facing the National League Reliever of the Year, Josh Hader. They proceed to rally back to win the game and advance to the NLDS, where the Dodgers awaited. 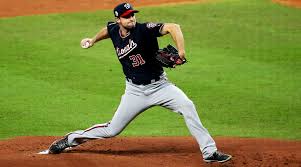 After going down 2-1 in the series, The Nationals Proceed to win back-to-back games, including a extra inning Grand Slam by Howie Kendrick to secure the NLCS appearance. They meet the Cardinals in the NLCS, where they swept the cardinals. Only allowing 2 runs in the first 3 games of the series. Who would have thought they get this far. Starting the season off poorly and falling below .500. Towards the end of the season, that poor start turns into a big winning stretch, that secured them the Wild Card spot. What awaited them in the World Series, was a elite Astros team. The best pitching rotation in all of baseball, alongside some of the best bats as well. With neither team winning a single game at home, the series went to a “Game 7”. Trea Turner struggled to get going, ending the night 0-4. Anthony Rendon and Juan Soto provided the way we expect them too. Anthony hit a solo shot to trim the lead, and Juan Soto provided a couple of base hits. The outstanding pitching by Scherzer, Strasburg, and Corbin kept the Astros hitters at bay. 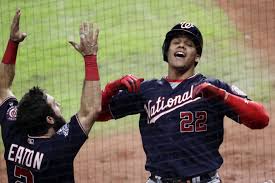 The Washington Nationals are 2019 World Series Champions. The first of its kind. Now the biggest thing to look forward to, is this major offseason around the corner. With players like Gerrit Cole deciding where to go. Until the 2020 season gets underway, the trophy is in Washington.

Yesterday, 12:00 AM    1 Entering tonight's game between the Vegas Golden Knights and Minnesota Wild, it had been 363 days since the VGK had played in front of their home crowd.